All You Need to Know About New Age Kurling Kroquet 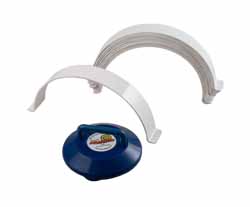 Bowls World sells all the equipment you need for at-home New Age Kurling Kroquet. Our Kurling Kroquet sets are available in assorted colours and contain nine handmade fibre glass Kroquet hoops and a Kurling stone. Just click on the link above to buy.

Meanwhile, here are some facts and information about Kurling Kroquet, including the history and origins of the game, and rules on how to take part.

What is New Age Kurling Kroquet?

Kurling Kroquet is a spin-off from the original croquet game. However, the main differences are that kurling stones are used instead of balls, mallets aren’t required and semi-circular hoops are used instead of the traditional versions. Instead of on a neatly manicured lawn, the game can be played on any smooth surface, such as sports halls, or on vinyl or wooden flooring at home.

What is the History of the Game?

The original game of croquet can be traced back to the 1600s when there was a similar pastime called ‘Pallie Mallie’ played in London, (from which the street ‘Pall Mall’ gets its name).  A few hundred years later croquet soared in popularity among the British aristocracy, and owners of stately homes would often host croquet parties in their grounds. The game caught on worldwide and there was even a croquet event in the 1900 Summer Olympics.

Fast forward to this century and there’s now a new take on croquet – Kurling Kroquet. This fantastic new game was the brainchild of pioneer John Bennet, from the UK, who thought up a series of sports that people of all abilities could enjoy. New Age Kurling was his first sporting idea, and, after his invention caught on, he designed and created other games that also rocketed in popularity such as New Age Bowls, New Age Petanque, Kurling Golf and Kurling Kroquet. These games are now played in schools and clubs up and down the country and further afield.

What are the Rules?

The rules of the game are fairly simple and are loosely based on the game of croquet. All you have to do is to place the nine Kroquet hoops at random intervals on your designated surface. Toss a coin to see who starts, and then take it in turns to propel, or slide the stone through each hoop. If a hoop gets knocked over during the game, you just need to stand the hoop back up, and replay the shot. The player with the lowest score is declared the winner.

The beauty of Kurling Kroquet is that it can played by people of all ages and abilities, from three-year-olds, right up to centenarians. The game is easily adapted for all-inclusive play as pusher sticks and/or ramps can be used so that everyone can join in the fun. And, if you like this game, there are a variety of other New Age family games to collect through Bowls World, including bowls, Kurling and Petanque. Just click on the link above to buy.

Bowls World – Click here to buy New Age Kurling Kroquet sets, Kurling ramps and/or pusher sticks online. If you order through us, we offer free postage to the UK mainland.